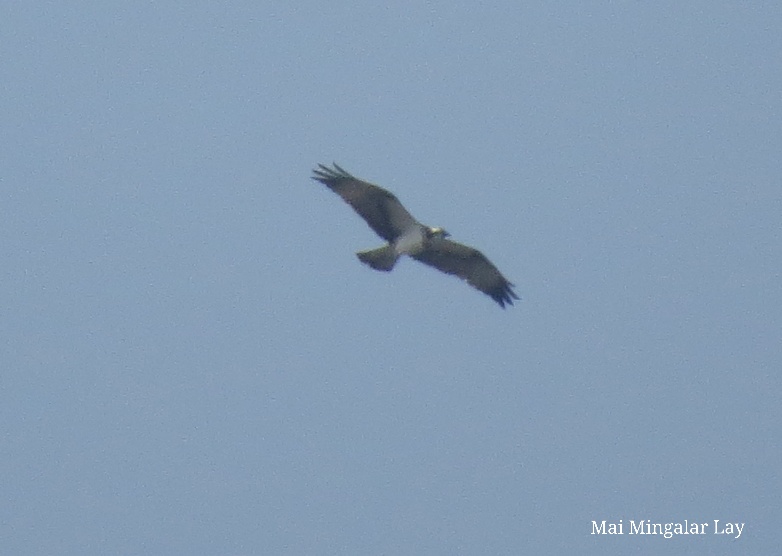 A birding at Moeyungyi was collaborated by Myanmar Bird and Nature Society and SST Tourism Co., Ltd on 28 December 2019 with ten participants including three Tour leaders, Ko Ye (Birder) MBNS Executive, S.S.T Tourism Bird Guides Mr.HtayNgwe and Mr. Mai Mingalar Lay. Moeyungyi is located about 70 miles north of Yangonwith an area of 40 square miles in Wow Township, Bago Region, and was designated as the first RAMSAR site in Myanmar in 2004. It is home for 20, 844 birds from 44 species of migratory birds and 67 species of resident water birds according to the figures for the end of January in 2018.

Today (28th Dec 2019), we started to leave for our birding site from our meeting point, Myae Ni Gone, at 06:00 am with two buses. After driving forty minutes, we arrived at Htaukkyan, Mingalardon Township, and we had our breakfast and tea at Tat Lu restaurant – Shan-noddle, Monehinga was completed our morning meal. Next, we headed for Moeyungyi driving on Yangon – Mandalay high way – on the way, Black Drongo, Egrets, Jungle Myna was firstly added to our list. When we arrived at Moeyungyi Ticket Counter, two black-capped Kingfishers, Common Kingfisher, masses of Barn Swallows, Sand Martins, and Eurasian Wryneck was sighted on walking in ten minutes to Moeyungyi Restaurant. After relaxing for about six minutes, we started to sail inside with two boats to see the water birds. When we are on the boats seven Whiskered Terns, two Little Grebes, Osprey, three Oriental Darters listed on the list. Then, to see many more species, we tried to do birding at the bank of wetland where many fish farms and some huts located near. On the bank, there are really good views by looking back to the wetland, and here, It can be seen many species even though shorebirds feeding there. On arriving at the bank of Moeyungyi Wetland, firstly starting to hear the calling of Striated Grassbird and saw its two perching at the post, and fighting in seconds. Next, we kept it walking and heard Prinias and Reed Warblers calling around. Firstly, we saw two black-browed Reed Warbler at five meters in distance by calling.

While did birding here about four hours, we listed Oriental Reed Warblers, Yellow – belliedPrinias, Little Green Bee-eater, Pacific  GoldenPlover, Baya Weaver, Plaintive Cuckoo (male and female), Yellow Bittern and others. We had our lunch at the Moeyungyi Restaurant and did the bird list. After that, continuing birding around the resort, Asian Pied and Chestnut-tailed Starlings, Sand Martin, Blue-tailed Bee-eater were added, and seventy-three bird species were heard and spotted on the activity. In the evening at fifteen passed three, we went back to Yangon.

NOTE: Thanks to Moeyungyi Resort for supporting boats the whole trip and every single of participants for participating with us.